Mount Putuo is a small island in Zhoushan, It is one of the four great buddhist mountains in china. Buddhist temple and cultural Mecca spread out like stars in the sky or chessmen on the chessboard on the mountainside. Include three major monasteries, there are over twenty buddhist temples and convents. Tall ancient trees stand, brahma patter and the voice of the sea mingle. We rode the ferry to Putuo Mountain at about dusk, the dust cleared in the afternoon, the sea was bathed in sunlight, the tour guide could not help sighing our good luck,she said “we have the predestination with Buddha. If we are a few people who missed it, we have made numerous trips to here and can not set foot on here due to the variable weather at sea.” Standing on the deck, we could see a statue of avalokitesvara from a distance, the visitors on board had already began to bow down to in the direction of Mount Putuo.

Its first temple is called Guanyin Temple, built in 863 AD. Here incense continuously throughout the year.

It is a non-stop ferry services to Mount Putuo from morning to night.

Sunset, the sky was a faint red.

We left the dock and saw the most striking landmark gate of Mount Putuo. Holy Land PuTuo were engraved on the plaque.

I got up early in the morning and wandered alone in the Putuo Mountain. The nameless lakeside passing last night was originally chequered with sunlight and shade.

In addition to many monasteries, here that hundred-year-old trees are everywhere.

There is a lotus pond in front of Puji Temple.

The lotus bloomed, against ancient trees, pavilions, archs, it added immeasurably to the charm of this lotus pond in hot summer.

Dingxiang Pavilion is in the middle of the pond.

In the distance antique buddhism museum. 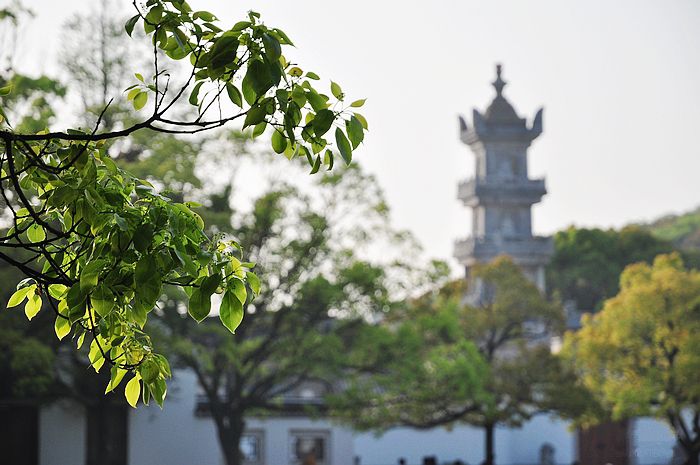 At the southeast side of Puji Temple, Pagoda is one of the three treasures of Mount Putuo, it stands beside the lotus pond. It was first built in the Yuan Dynasty, it was cornered with Taihu Lake stone.

we came to Puji Temple, the outstanding temple was covered with the thick ancient trees.

Unfortunately, the hall of Puji Temple was undergoing repairs. The decoration and carving with dragon patterns was impressive in this temple.   A coloured dragon head hung on this beam.

Those copper dragon bell on the censer.

Before 7 a.m, many visitors from afar began to burn a stick of incense and worship the Buddha.

There’s an rule that each tourist offers the incense sticks three times in Putuo temple.

Around Puji Temple radiate in all directions, there are many quiet walks, you can avoid crowds.

The Buddha was much respected and loved by people with the continuing incense in Puji Temple. This is the place where the master takes meditation, quiet and leisurely, playing Buddhist music in the hall, that is really the two worlds of in the courtyard and outside.

This sculpture of a young monk is regarded as easygoing in the courtyard.

There are numerous stone statues and murals in the courtyard. This is a photograph, the devout men bow down to the Goddess of Mercy.

A continuous flow of people came to visit Puji Temple.

A Tibetan Buddhism student also came to the temple and bowed to the statue of the Buddha.

We moved into Zizhulin Scenic Area, the huge bronze statue of guanyin bodhisattva could be seen from far away.

Guanyin Bodhisattva  was built in 1997, it is 18 meters high, it can be said as the highest Guanyin bronze statue in the world. It is also the symbol of south sea buddhism world.

These stone carvings are gorgeous and vivid on the whole wall behind Guanyin Bodhisattva.

My left-hand side is Lojiashan Isle, according to legend, the Goddess of Mercy first began to practise Buddhism on Lojiashan Isle which lies across the sea from Mount PuTuo. 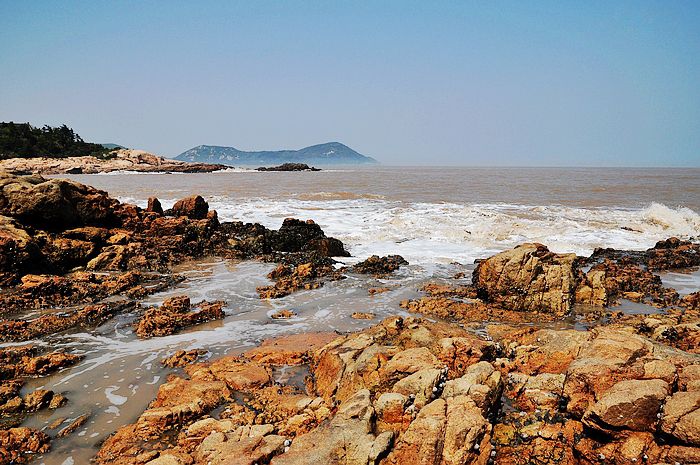 we sat on the reef , watching waves coming over and over again, silver wave slapped reefs. 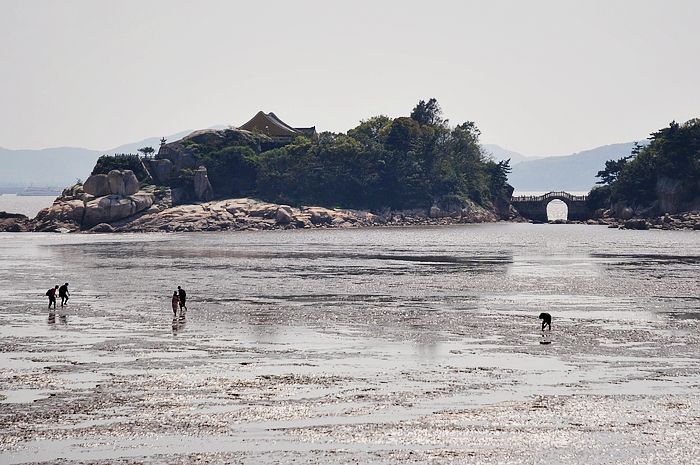 On the way back to the dock, people were picking up shells on the beach.

I wanted to turn back time and cherished the first night of this trip. After we had eaten vegetarian menu, we arrived at the old street not far away from Puji Temple.

Shops stood in great numbers on both sides of the old street.

These monks shoe were priced.

These monks clothing is a mix of linen and cotton.

A craftsman was carving.

This is a corner of the restaurant, the shop keeper afforded not only food but also a handwritten Heart Sutra.

The short meditation trip of Mount Putuo came to an end. Purifying my own mind was not at all easy, it took a lot of time and hard work.

Hey there! My name is Yuning. I’m a full-time adventure travel blogger & photographer who’s been exploring the world for over 6 years, with no plans to stop anytime soon. Welcome to my travel blog! This is where I share entertaining stories,amazing photography, and crazy adventures with you from my perpetual travels around the world.