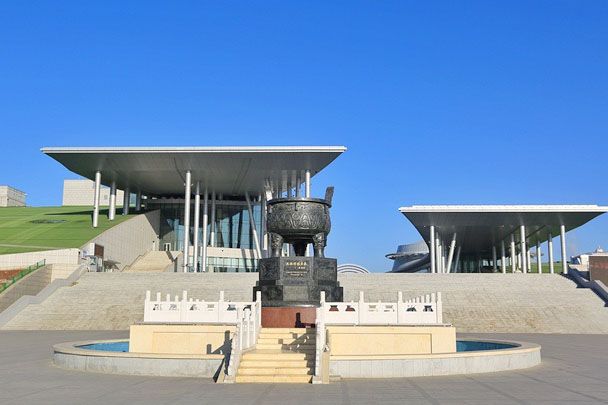 Since ancient times, Inner Mongolia has been the central region of the settlement and activities of the ethnic minorities in northern China, From the Emperor Qin and the Emperor han to the Mongolian emperor Genghis Khan, from the Rong tribes, the Di tribes and the Hun tribe to the Ming Dynasty generals and the Qing Dynasty troops, these people took turns on the stage of history and left their mark on history. In the Inner Mongolia Museum, the cultural relics on display give people today a glimpse of the extraordinary experience that the grassy plain has ever had.

If someone talks about the natural landscape of Inner Mongolia, between the vast sky and the boundless grassland flocks and herds grazing will naturally appear in people’s mind. Prairie charm is the most recognized charm in Inner Mongolia, plants are the elements that make up the grassland. In the museum, various plants on display are an eye opener.

Speak of the history of Inner Mongolia, what do you think of? The speeding cavalry troop，the knights riding horses and hunting eagles with bow and arrows. The bold and tough nomads are synonymous with Inner Mongolia.

The main body of the entire museum is divided into four floors, the internal space is open, the number of cultural relics in the museum is as many as 4 million. Every cultural relic and every picture recorded the lives and experiences of people at that time.

These collections are carefully placed one by one and together form a continuous time line, let the visitors who has been inside brush away the dust of history and admire the grassland culture and civilization built by the ancestors.

The magical Inner Mongolia not only gave birth to a unique nomadic culture, but also had an immeasurable impact on the agricultural civilization of the Central Plains. A variety of finely crafted ceramics and exquisitely carved jade ware are presented in front of the visitors’s eyes.

The throne engraved with dragons is old-fashioned and still follows the wild style of ethnic minorities alone. The throne was once the seat of royal highness Dalizaya in Alashan Huoshuote Flag, Inner Mongolia Autonomous Region, and is currently the only Zhasake dragon throne preserved in Inner Mongolia.

Some of them were once the treasures of the country, and some were curios for the royal family. They are either hidden in the Palace or flowed into troubled times. As time goes by, these ancient artifacts from different dynasties are displayed in the Inner Mongolia Museum. The scars are faintly discernible, with a little vicissitudes but full of mystery.