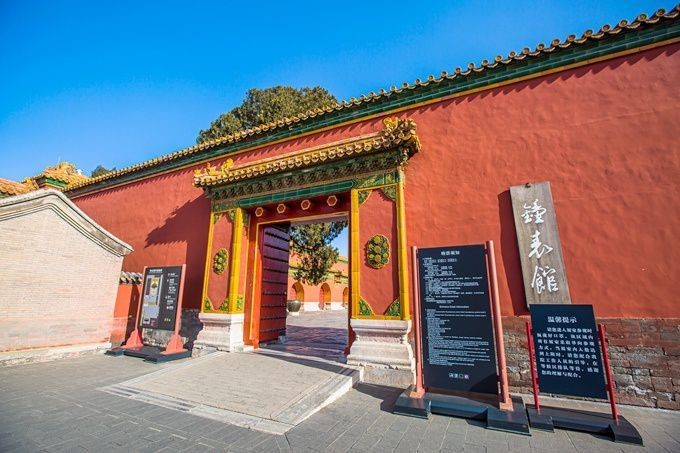 The Forbidden City, which spans the Ming and Qing dynasties and has a history of 600 years, is a priceless place. It collects more than 1.8 million precious cultural relics, such as “Ping Fu Tie” and “Along the River During the Qingming Festival”. Among the vast majority of collections, the clocks and watches are imported from the Western world, they were brought to China imperial court by the missionary Matteo Ricci during the Ming Dynasty, it’s history is not long, but it is also the most exquisite and gorgeous shows of the Forbidden City.

The clocks made in China are mostly round-shaped, their shapes are greatly simplified, mostly decorated with gold, pearls, jade, and precious stones. The clocks shapes produced in Britain, France and other countries are mainly of western architecture and vehicles and horses due to more mature craftsmanship and complex shapes.

This copper-plated enameled folding screen clock is made in France. The whole clock is half-moon-shaped. It is very reminiscent of the magnificent and huge church built in the Renaissance. It is brightly colored and is characterized by elaborate and meticulous workmanship.

The concise furnishings and single light create a dazzled world of clocks for people. In addition to the timekeeping function, these clock have extremely high ornamental value, the figures, trees, flowers, birds and beasts are vivid and lifelike. Walking in the Clock Museum, we enjoy these clock one by one, it is inevitable to have a dazzling feeling.

The names of clocks are mostly complicated and awkward-sounding, the Clock with Flower and Bird is made in the United Kingdom. the cage was woven from glod-plated copper wire, a bird stands on the pole when caged. When the machine starts, the bird turns left or turns right, spreading its wings and shaking its tail, jumping back and forth between horizontal bars, and the sound of birds chirping loudly. With the sound of music, the inner cylinder opens in the cage, the water valve rotates inside, it resembles a waterfall. The treasure star flower at the top alternately rotates, radiating brilliant light, very gorgeous.

Time is a fascinating concept. Days and nights, time, the flight of time…there are countless words and sentences related to time. The invention of clocks allow human beings to accurately describe time and record time. These tools containing wonderful thoughts exist in people’s life in various appearances.

If you observe carefully, you will find that these clock can tell time in a variety of ways. This gilded copper man English clock, there are three horizontal clock dials that respectively represent the three main functions: hour, minute and second, one person stands in the center of each dial, the long rod in their hands acts as pointer. After winding the clock, each person on the clock dial rotates at a fixed speed, and the person on the second dial rotates the fastest. The idea for the clock is ingeniously conceived.

Imagine this: if you stand in this cleverly shaped clock, you should have a feeling of looking up at the starry sky.

The emperor of Qing Dynasty always insisted on the best at everything. No matter whether the home-made clocks or imported goods, accurate timekeeping, exquisite design, gorgeous colors, beautiful music, and auspicious meaning win the hearts of the emperor, and these clocks have become precious decorative furnishings. Today, the emperor was expelled from the palace, but these clocks are running as usual.

All the while, the clock is ticking, the museum seems to collect the time of the world, we have seen countless stories about time, the most gorgeous, probably.