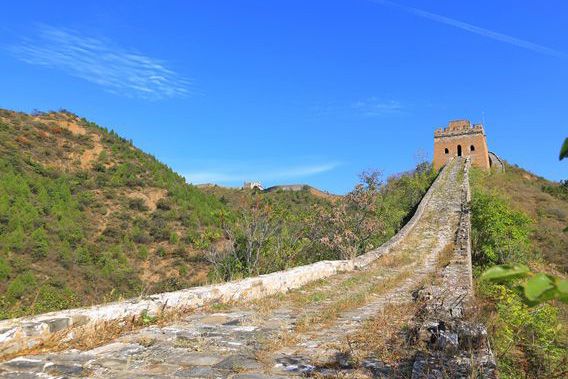 The history of the great wall building began in the Spring-autumn and Warring States Period and lasted to Ming Dynasty. The wall has been two thousand years and witnessed too many stories and legends —— the autocratic emperor pursued everlasting rule, the officers and soldiers died in the bloody battle, the masses had no means to live inside and outside the Great Wall…… in the long years, the Great Wall is an epic, war and peace is its footnote.

Simatai Great Wall is 5.4 kilometers long and has 35 watchtowers. The wall is full of ups and downs, the wall connection to each watchtower is represented by a wide variety of forms. Simatai Great Wall can give a feeling of solid and steady, it is extremely rare in the whole Great Wall.

The steps beneath our feet are not level, and traces of the wind and rain are faintly visible. Damage and motley, every stairway records the war-ridden years, moreover each step people step on here seems to have a historical story.

Under the blue sky and white clouds, the warfare in those days is revealed by the weather-worn and klunky ancient Great Wall. Shining spears and armoured horses have become the past, nowadays the Great Wall has already been transformed into a tourist attraction where Chinese people will visit once in their lives. It is a symbol of the Chinese nation, a testimony to a period of history, and a legend of black brick stacking.

Throughout history, the Ming Dynasty was the longest dynasty of constructing Great Wall, and was also the dynasty of self-seclusion. There is always a feeling that the Great Wall is a protection or a guard, but it also represents a certain kind of closure and unconfidence from a sideways perspective. For thousands of years, the genuine deterrence and resistance have never been the thick wall.

For thousands of years, inside and outside the Great Wall, flames of war and smoke of gunpowder, the cracked wall is filled by glory and vicissitudes. The continuous Simatai Great Wall gives a dismal beauty in the sunset, a thousand of year, as if a moment. Looking through the beacon tower, I see the lush green mountains, difficult terrain. The klunky Great Wall mutely records the past under blue sky and white clouds.

It’s getting dark. Hidden among the trees and hills, the great wall in the twilight is full of unknown and imagination and attract people to check it out.

The lighting setups make the weather-worn great wall more tender feelings. Nearby, the lights of Beijing city are all on. There is a family behind every lamp, the lights in this city seem to be the little happiness of countless families.

Under a bright moon, the tourists wander on the well-lighted snaking Great Wall, the mysterious mountains in the dark stumble into everyone’s heart.

Did the officers and soldiers garrisoned the border town ever think China after a thousand years? There is no war, China does not require the wall to defend its towns and villages, all that’s simply the guard and contribution of ordinary people, the years have never been so fine.

Summer Palace is a imperial garden which is worth visiting
Jingshan Park, the royal garden to overlook the Forbidden City
The Palace Museum Clock Museum
Drum Tower and Bell Tower of Beijing, a famous cultural landmark, the quintessential Beijing