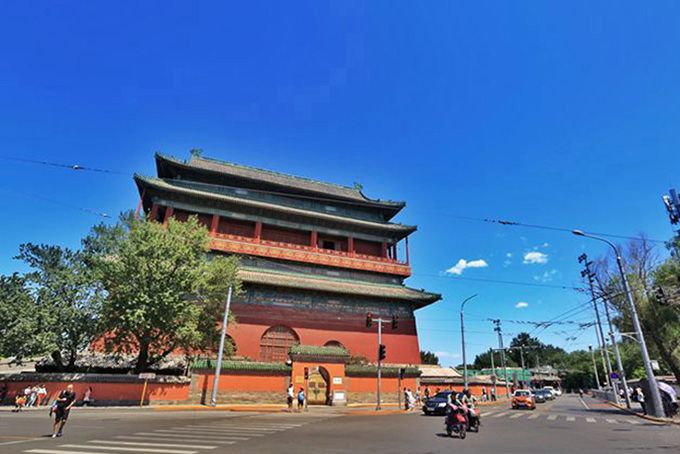 Were it not for growing up as a native at the foot of the imperial city, if you haven’t walked through the alleys with the bustle of hawkers, if you haven’t heard morning bell and evening drum of Drum Tower and Bell Tower, you would never know before Peking became Beijing how ravishing Peking looked.

The Drum Tower was built in Yuan Dynasty, it is a full wooden structure and is nearly 50 meters high, there are three arched doors on the north and south side and two arched doors on the east and west side at the ground floor. There are steps connecting the first floor and the second floor, sixty-nine steps, which are relatively steep. On its second floor there originally were 25 drums. Among them, there were one big drum and 24 smaller drums (The big one represents a year and the 24 small drums represent 24 solar terms of China).

Located at the northern end of Di’ anmen Street, Drum Tower and Bell Tower witnessed old Beijing charm, recorded the busy traffic of this city, and experienced the chaos of war. The people in Beijing have special feelings for Drum Tower and Bell Tower. For them, the Forbidden City belongs to the emperor, and the prince’s mansion belongs to the relatives of the emperor, but the sounds of the bell in the morning and the drum in the evening belong to everyone. 25 drums are arranged around the wall surrounding one giant drum measuring two meters in diameter on the second floor of Drum Tower. At 7:00pm the drums were beaten quickly 18 times then slowly for 18 times. It was beaten in cycles until it was beaten for a total of 108 times. This announces the beginning of the night watches. The drums were beaten every two hours which not only announced the time, but also the change of the guards in the city.

Drum Tower and Bell Tower is a group of ancient buildings on the northern section of Beijing’s north-south central axis. For many people the layout of the old Beijing city is almost perfect, and all buildings is based on a north-south central axis in the center of the city. This central axis takes the southern end of Yongdingmen as a starting point, and passes through a collection of buildings such as Zhengyangmen, Tiananmen, Meridian Gate, the three halls in the Outer Court, the three halls of the Inner Court, Gate of Divine Prowess, Jingshan and Di’anmen, and ends at Drum Tower and Bell Tower. This drum is the only retained drum by the destruction of the Eight-Power Allied Forces in those days. The drum surface is damaged and has many knife marks.

The cruise ships are rippling with the waves in Houhai, the southern Beihai white pagoda is shining in the sunshine, The farther building is the Xinhua News Agency Building, which resembles a pen.

In ancient China people used a unit of time called Geng and the night was divided into 5 Gengs.

Every night in Beijing when the Bell Tower sounded for the first Geng, the city gate was closed, traffic was stopped and the streets were cleared.

Every morning in Beijing when the Bell Tower sounded for the fifth Geng, the city gate was opened.

People living in Beijing relyed on morning bells to get up in the morning and relyed on evening drums to sleep in the evening whether civil and military officials or civilians.

The distance of Drum Tower and Bell Tower is about 100 meters apart. “The drum tower is in front, the red wall and yellow tiles. The bell tower is behind, the gray wall and green tiles. The drum tower is fat, and the bell tower is thin.” The Drum Tower and Bell Tower functioned as ancient Beijing’s time keepers during the Yuan, Ming and Qing dynasties. They set the pace and rhythm of daily life for everyone, from the emperor to the common citizen. The Drum tower’s drums were used to keep time at night, while the Bell Tower’s bells kept time during the day.

Coming out from Drum Tower, we go through Drum Tower and Bell Tower Square and arrive at Bell Tower. Bell Tower was built in the Yuan Dynasty and was destroyed by fire in the Ming Dynasty, it was rebuilt during the Qianlong era of the Qing Dynasty, to prevent from fire, the entire building adopted the beamless brick and stone arch structure. The design emphasized the function of resonation, sound amplifying and sound transmission, which boasts a unique position in Chinese bell tower architectural history.

The big bell in Bell Tower was cast in the Yongle era of the Ming Dynasty. It is 7.02 meters high and weighs 63 tons. It is the earliest existing and heaviest ancient bell in China, and it can be called the king of ancient bells in China.

Standing on Drum Tower and Bell Tower, except for walking into history, and what we see is a mixed Beijing containing both old era and new era buildings. The low-ceilinged bungalows are covered entirely in the green trees of Beijing’s old city, a scene of carefree life spreads out before us. The streets are busy and row upon row of tall buildings are everywhere in the new district in Beijing, we enjoy the fast pace of urban life, as time go by, every moment we are in progress. The western three oval buildings is Xihuan Square, Beijing Zoo, Exhibition hall, and Planetarium are all nearby.

The bell and drums keep track of the time, and time and tide tell the history. They silently look down at everything in front of them and witness each change as it takes place in the city.

Drum Tower and Bell Tower still stand and continually welcome the next moment, the next day, the next month, the next year, and the next generation.